Sweet Pongal or Sakkarai Pongal is a traditional South Indian dessert made with rice and lentils sweetened with Jaggery. So, If you are a regular reader of The Tastes of India then I am sure you must be eagerly waiting for the second story related to Jagannath Temple. 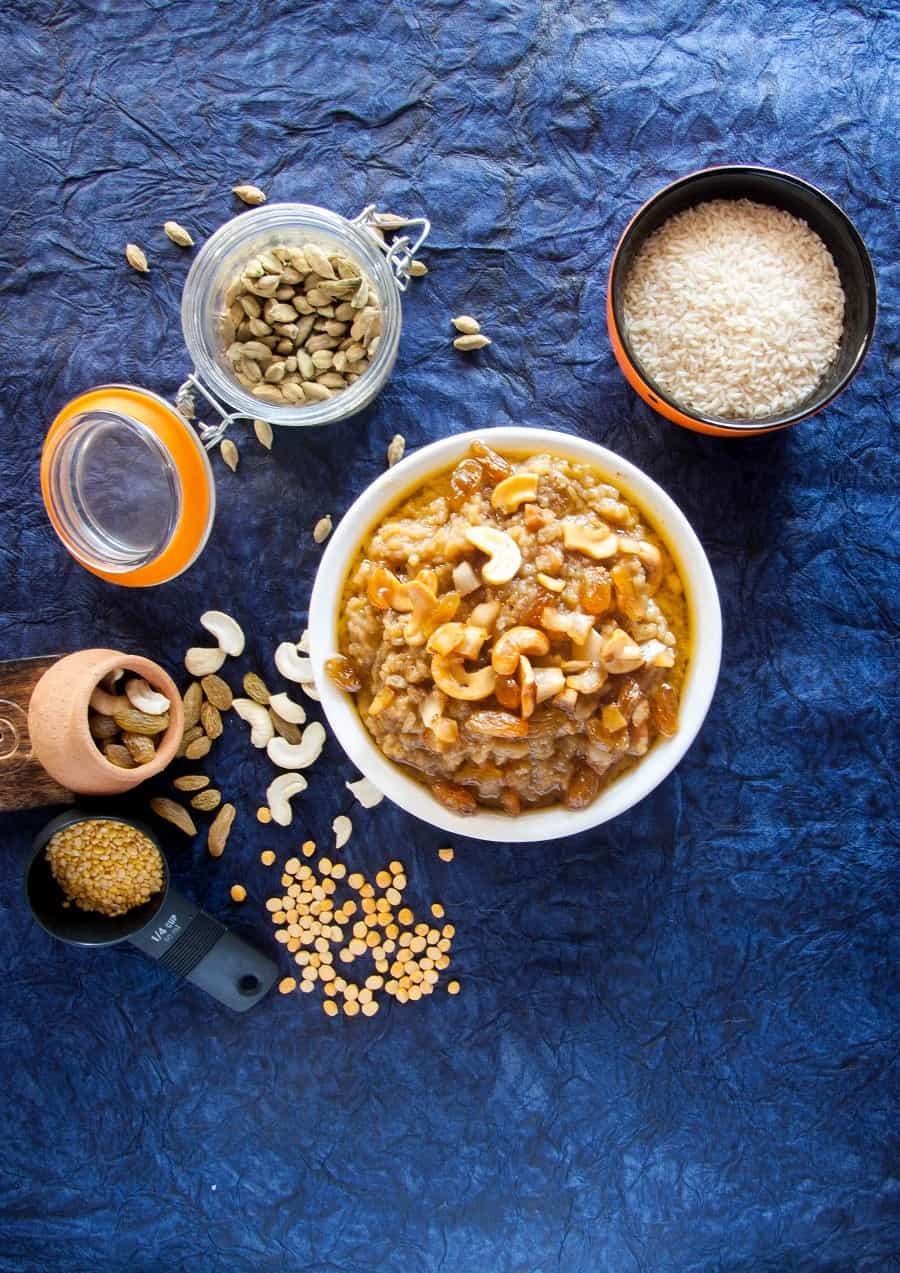 …then no worries you can still have a glance at it by reading my last post where we talk about the reason of an unfinished idol of Lord Jagannath and also learn to make a traditional recipe from Orissa, packed with proteins, vitamins, and minerals. 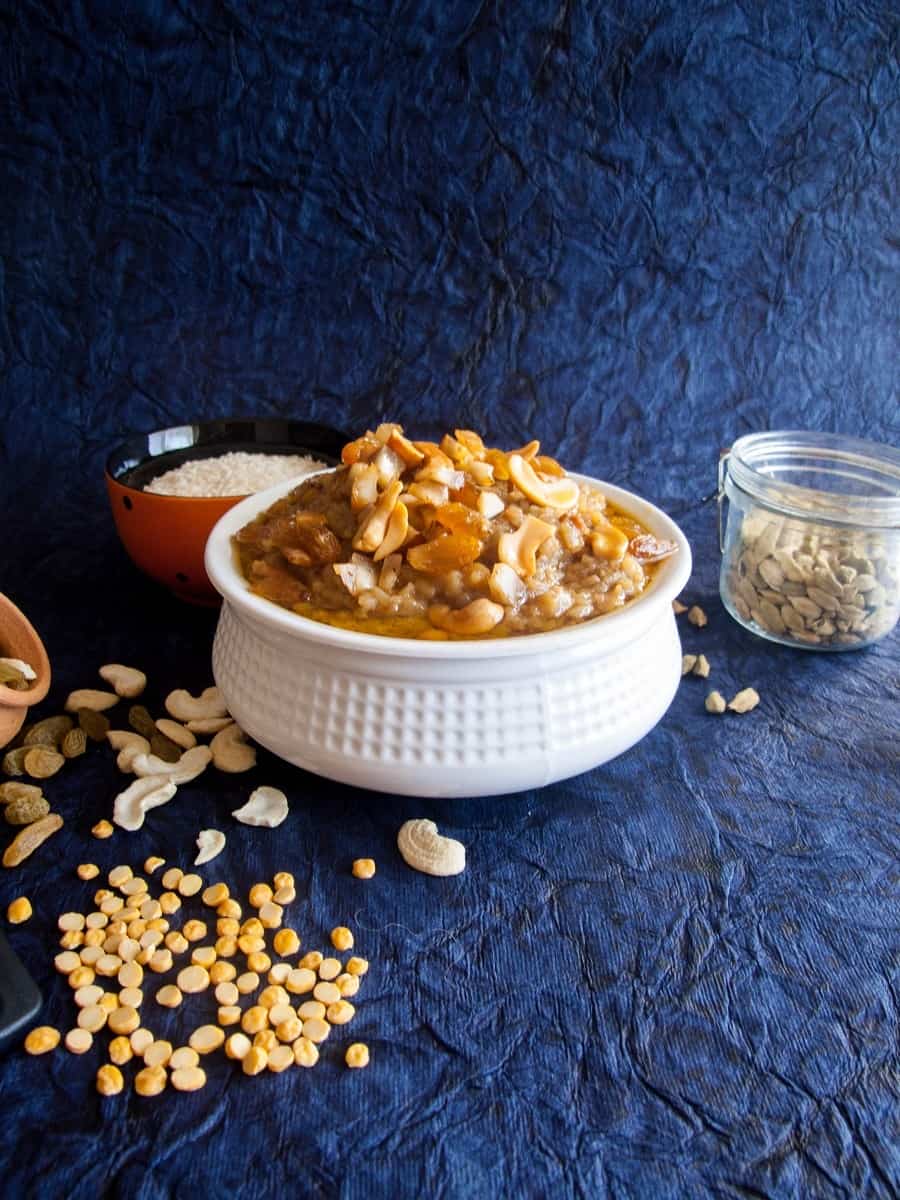 This recipe is also a part of the Maha-prasad offered to Lord Jagannath in Jagannath Temple.
Ok, so onto the second story… 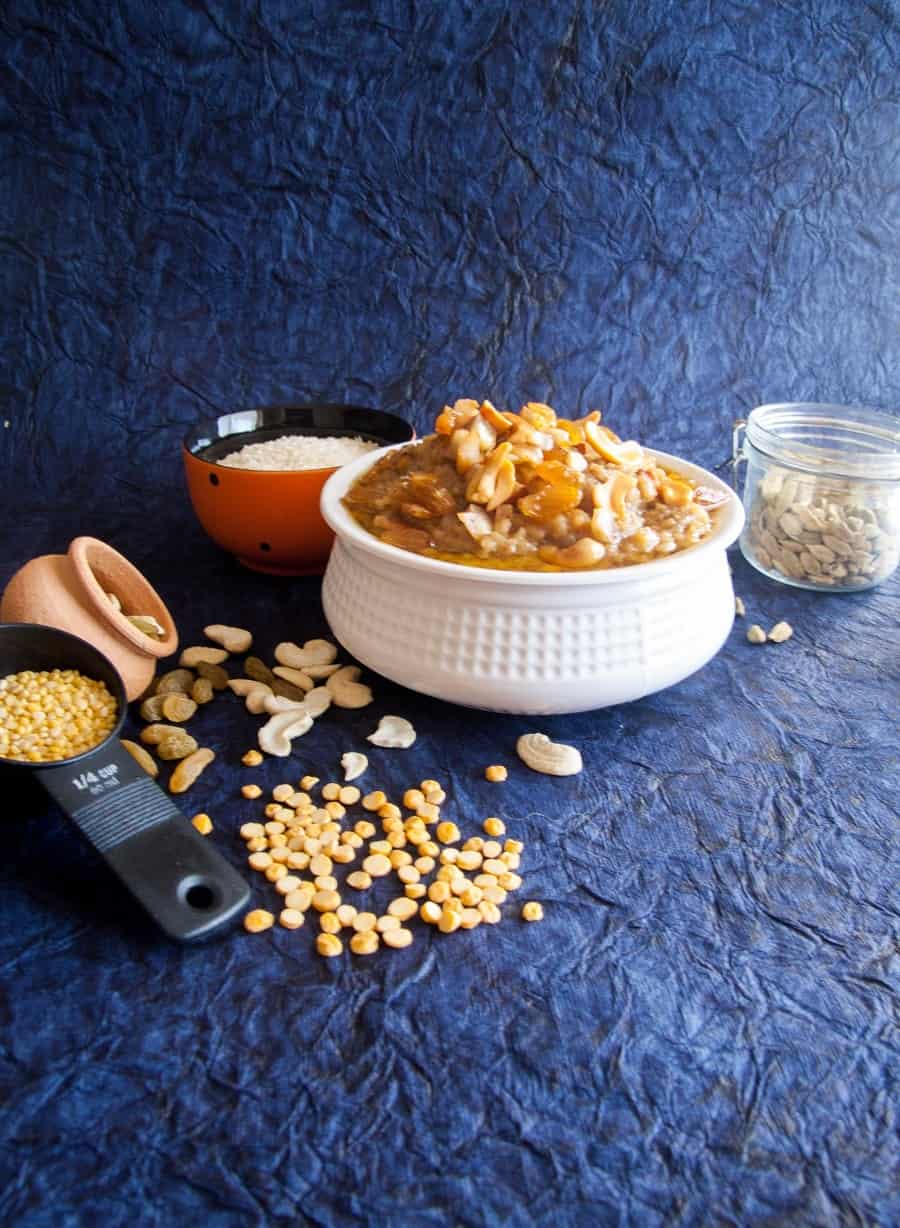 Just like a few of my readers, My dear Hubby asked me a very similar question as to why the face of this Idol is so different from any other Idol. 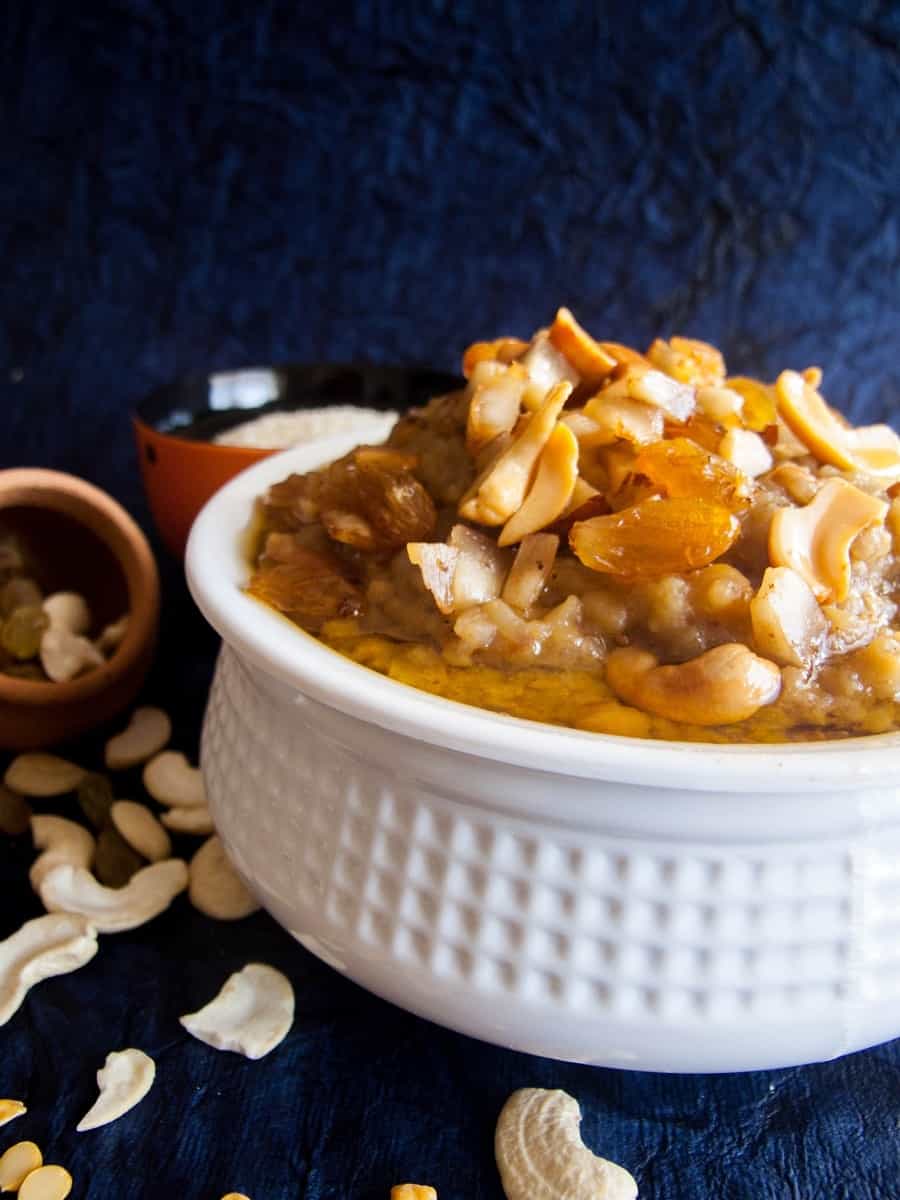 So the story is from Mahabharata and tells the secret behind the face of Lord Jagannath.
Mother Yashoda, Subhadra and Devakiji came from Vrindavan to Dwarka. The queens from Dwarka requested to tell them the story of Krishna bal leela. 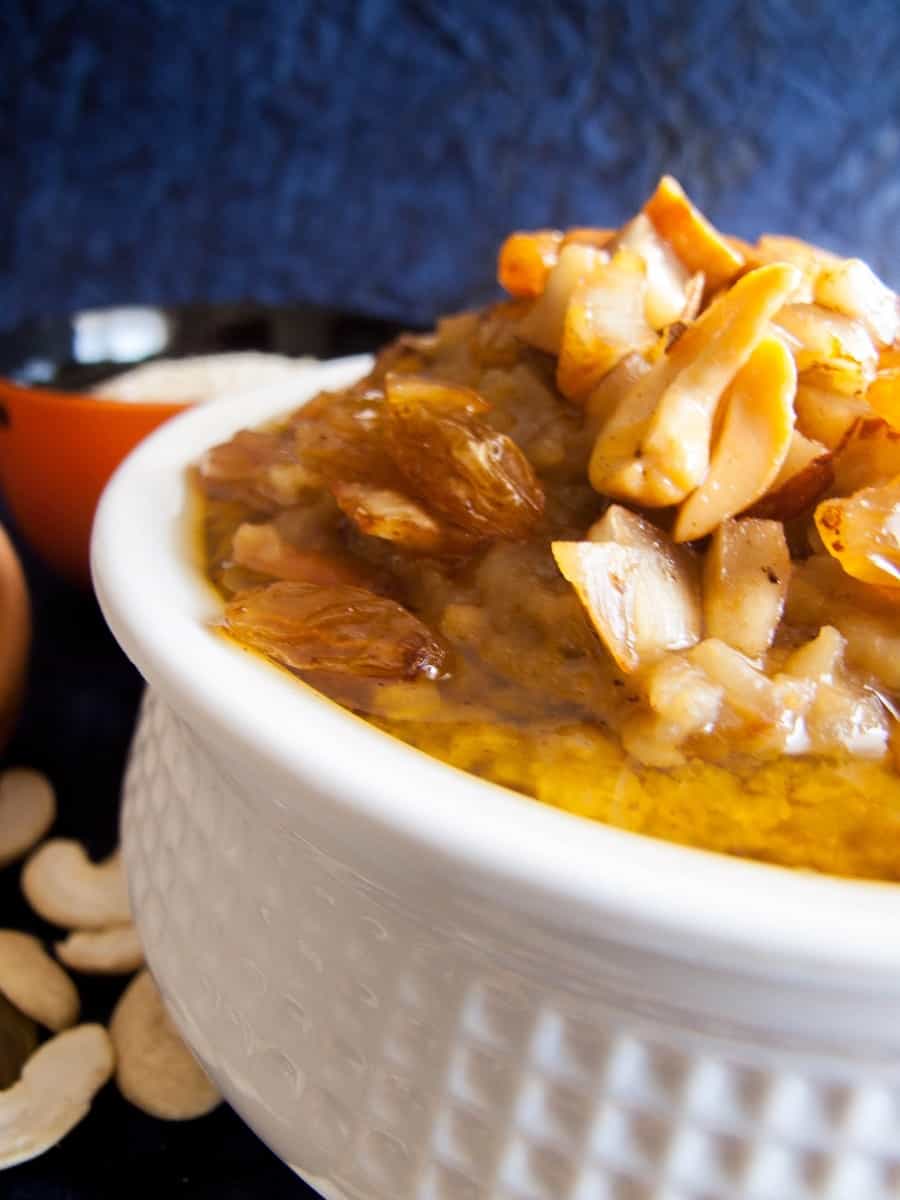 Subhadra Ji was guarding the gate, that if Krishna and Balarama come she will warn everyone. But she too became so engrossed in listening to Krishna Bal Leela that she had no idea of Krishna and Balrama’s arrival. 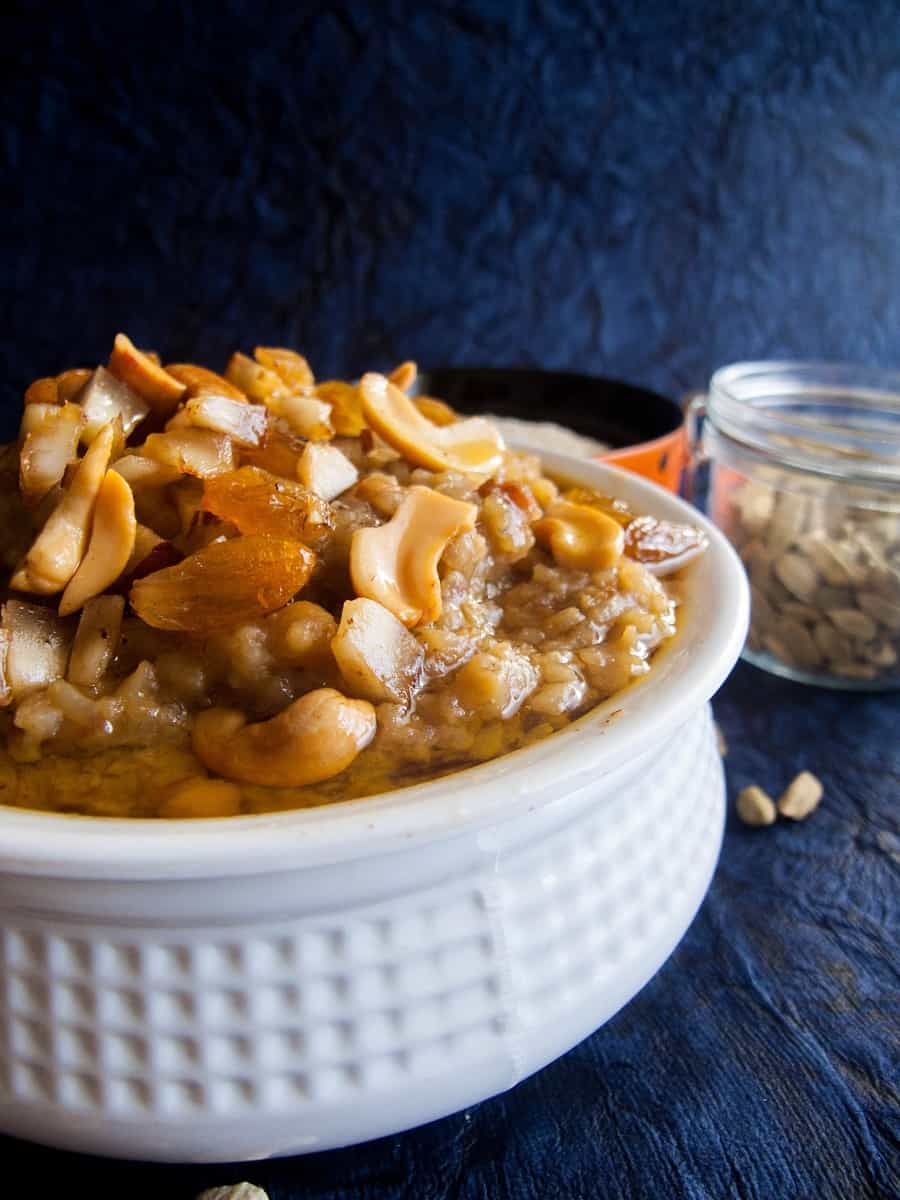 When Krishna and Balrama both brothers, heard this story, they were enthralled. They were so charmed that their hair became straight and their eyes grew big. Their lips had a broad smile and their bodies started melting in the loving atmosphere of devotion. Subhadra became very emotional too and hence her body melted the most and that’s why her height is the smallest of the 3 idols in the Jagannath temple.

That’s when Narada Muni came and everyone came back in a huff. Seeing this form of Shri Krishna, Narada said, “Lord, how beautiful you look. When will you take an avatar in this form?” 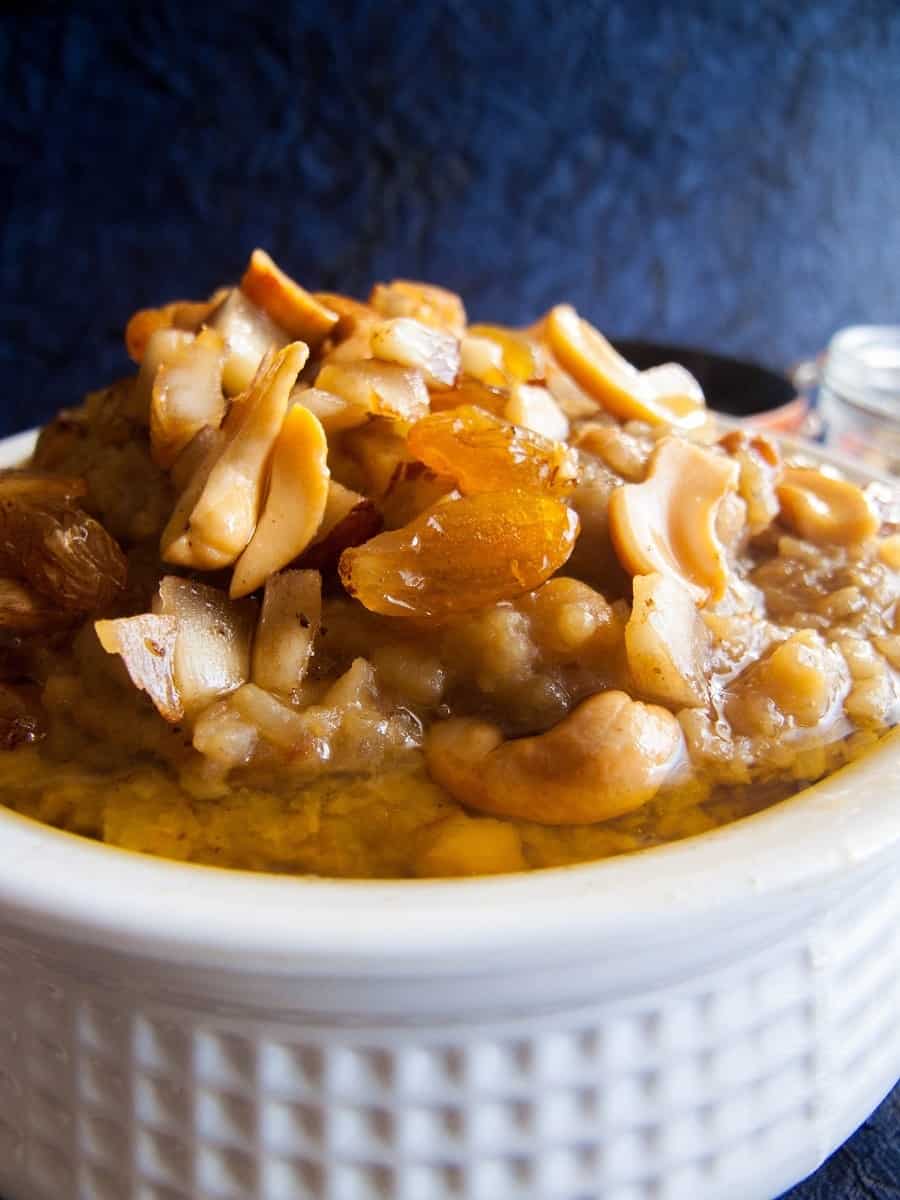 And Krishna replied that he would take such an avatar in Kali Yuga.

That’s how he took the incarnation of Jagannath in Kali Yuga with the help of King Indradyumna as the medium. And that’s the story behind the idols in the Puri Jagannath Temple.

I hope, you would now have understood the reason behind this mysterious face of Lord Krishna in Jagannath Temple. Sweet Pongal or Sakkarai Pongal is often made for the festival of Pongal, celebrated to mark the beginning of the harvest season in India. Pongal in Tamil means something that is “overflowing” and the festival is celebrated in honor of abundance and prosperity.

The ritual of boiling over of milk in a new clay pot is usually done to ensure prosperity for the family.

In Tamilnadu, sweet Pongal is usually offered in temples as Prasad. You can add a little pinch of edible camphor to make this Sakkara Pongal, to get a flavor of temples prasad.

Traditionally, it is served along with Ven Pongal, which is a savory version of this Pongal called Ven Pongal along with other preparations on a banana leaf. 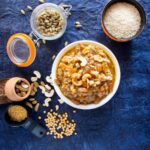 Do not compromise on the quantity of ghee.

You can serve hot or cold.

Andi if you really liked this post and found helpful to you, please take a minute of your time to leave a comment and share it so that others have access to it as well. Thank you all for your support.

2 thoughts on “Sweet Pongal Recipe – How to Make Sakkarai Pongal”