This weeks recipe is about how to make samosa, a famous Street Snack recipe made of potato stuffing.

As kids, catching a cold wasn’t uncommon and when it is that season, everyone of us will catch a cold one by one. And when that happens, I still recollect those words from my mom, “Drink a glass of turmeric milk and you should just be fine”.

Back then, there were a lot of so-called intellectuals who would dismiss it off as an advice from an ignorant superstitious lady. But we never doubted that advice because we knew that it worked.

Turmeric and its uses weren’t just limited to treating cold and flu. We would treat wounds and injuries, body aches and what not.

In fact turmeric was our beauty cream when we were young.

One of the most important ceremonies during marriage is that of “Haldi” (meaning Turmeric). This ceremony involved application of turmeric on the entire body of the bride (or, groom depending on whose house the ceremony was happening).

Turmeric has had a unique place in Indian culture and every household ensured that turmeric is available at home at all times.

So much that during these days of the COVID-19 pandemic, a lot of people are using turmeric to wash vegetables and fruits.

Because of the anti-viral, anti-bacterial and antiseptic properties of turmeric. This in spite of the fact that a section of people say that it isn’t an effective method.

That’s not the point of our discussion here.

With so many benefits to its name, Turmeric deserved a discussion on the many benefits it has. Here is a very informative articles on the benefits of Turmeric.

While we are on the topic of Mom’s and their tip’s and advices, this stay with my parents has become memorable for more reasons than one.

It was Rakshabadhan yesterday. For my readers how do not know about Rakshabandhan, it is a festival celebrated in India when sisters tie a rakhi around the wrist of their brothers to protect them from evil influences, and pray for their long life and happiness.

They in return promise that they will protect their sisters from any harm. There is a practice of giving gifts in return as a gesture of love.

After a long- long time I was surrounded by my family members (the family I was born in) and celebrated rakshabandhan along with them.

We prepared traditional food that day, which was atually a combination of Dal, rice, some side vegetables along with some pakoras and chutneys.

And we made aloo samosa along with chutney in the evening. Our plan was to make samosa as a snack, but it became dinner for us. We had lots of them and ended up having no space for dinner.

I love Aloo Samosa and so does everybody here in my family. Frankly speaking Homemade samosa’s are the best. Aloo Samosa always remind me of my school days.

On 26th January and 15th August, the teachers used to ask us to bring lots of flowers or, bouquets for flag hosting. I would get up early in the morning, would go to park to collect flowers and then I would make a bouquet out of all the flowers and leaves I had collected.

I would go to school with this bouquet. We would celebrate 15th August and at the end of the day we would get a pack with a samosa, jalebi, boondi ke ladoo and some chocolates inside it.

And that small packet of snack meant a lot to me.

Small time food joints, school and college canteens, outlets in multiplexes and those fine-dine restaurants, pretty much everybody serves this snack.

The only difference is that Samosa takes a slightly posh look and feel as it climbs the ladder from one of those roadside tea-shops to the fine dine.

But when you ask any of them as to how to make samosa, the recipe would pretty much remain the same, except for maybe the addition of some dry fruits and paneer, as the price tag increases.

In this week’s recipe, we are going to see how to make samosa – the only wonder snack that probably unites the rich and the poor.

The samosa is defined in a rather sophisticated way by Wikipedia. Take a look at it –

A samosa is a fried or baked pastry with a savoury filling, such as spiced potatoes, onions, peas, cheese etc. It may take different forms, including triangular, cone, or half-moon shapes, depending on the region.

While I was reading about Samosas, I was surprised to see that this snack is even served in parts of Africa. Whattt! Isn’t it?

I too, felt that way because I always thought that it is something local to India.

Nevertheless, recipes on how to make samosa look similar everywhere irrespective of the region or, the country. 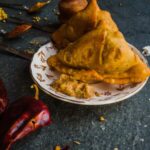 How to prepare Stuffing

How to make Samosa

The addition of oil in maida is a key ingredient to make samosa flaky. So do not compromise on that. Fry samosa’s on low flame else the crust of samosa will not turn flaky. The addition of panch-phoran gives a very unique taste to samosa.

Paani Puri Recipe
Paani Puri Recipe is a tangy, spicy North Indian Street food that gets its name because of the Puri and the tangy water used in it. Anyone who is been to Northern India is unlikely to have missed this unique cuisine.
Check out this recipe

White Matar Chaat Recipe
Matar Chaat is a popular street food from Northern India. Matar Masala Curry is used as a base curry for this chaat topped with onions, tomato, sev, tamarind juice etc.
Check out this recipe

Pav Bhaji Recipe
Pav Bhaji Recipe is popular street food from Mumbai. Bhaji is a combination of mix match vegetables and some Indian spices served along with toasted Pav.
Check out this recipe

A lot of time, effort and passion goes into each post. My greatest satisfaction comes from your feedback. If you really liked this post and found helpful to you, please take a minute of your time to leave a comment and share it so that others have access to it as well. Thank you all for your support.

2 thoughts on “Aloo Samosa – How to Make Samosa Recipe”

Scroll back to top
We use cookies to ensure that we give you the best experience on our website. If you continue to use this site we will assume that you are happy with it.AGREENOPrivacy policy